GDSCP - Training Courses in the Gambia

The GDCSP has, from the outset, recognised the importance of empowering Gambian staff to carry out all tasks themselves, rather than develop a culture of dependency in which they have to rely on others to provide a service.

Training has been seen as a crucial element in achieving this aim and we have run many courses in which we have sought to enhance the skill base of Gambian teachers who work with deaf children, both at St John’s School for the Deaf and also in mainstream schools across the country.
Babs and Helen delivering a training course - February 2013

The following training courses have been delivered in The Gambia by members of the GDCSP Team. Team members have usually paid their own expenses and, in some cases, also paid the local costs of training courses (lunches, per diem payments etc), though more recently we expect that such costs will be met locally.

April 2006
Continuation course for staff from St John’s School for the Deaf, building on the basic information previously provided and relating it more closely to classroom practice.

The second course was an initial awareness raising course for teacher trainers at Brikama College. This was an important development as we wanted to ensure that all trainee teachers in Gambia are given insight into the educational needs of deaf children and have an understanding that deaf children CAN be educated effectively, provided appropriate support is provided for their schools.

We reasoned that a pre-requisite for this was to teach their tutors first! We were joined in delivering this course by adult Gambian deaf representatives from GADHOH (Gambian Association for Deaf and Hard of Hearing) and also by Alvean Jones, a deaf VSO worker from the UK who is currently working with GADHOH.

This course was especially effective in that the deaf representatives really impressed the tutors at the College and the next day impromptu hand-written notices appeared around the College saying things like ‘We Support the Deaf’!

Unlike previous courses, which only considered deafness/hearing impairment, this course also provided an introduction to the education of visually impaired children. The usual team of Malcolm, Ruth and Debra were joined by Martin Bradbury, Senior Teacher of the Visually Impaired in Birmingham. Martin led the sessions on visual impairment.

The Cluster Monitors are an important group as they are the senior education officers from each area of the six areas of the country. This was our largest course with no less than 62 Cluster Monitors in the audience.
The aim of this course was to demonstrate to these senior staff that deaf children, and also visually impaired children, CAN be successfully educated.

It was hoped that they would then encourage schools in their areas to accept deaf children in schools in their areas, rather than these children being kept at home with no education. Support for the schools would be provided by itinerant teachers who would visit and provide additional help and guidance, just as happens in the UK.

The course was very well received with excellent feedback on the evaluation forms provided.

October 2007
Introductory course on School Leadership for the Senior Management Team from St John’s School for the Deaf. In this short course Malcolm focused on the aims and objectives of the education being provided and linked this with the School’s Vision and Mission Statements. We also looked at practical aspects of management and of providing leadership and example to other less experienced staff.

March 2008
Course for Head teachers from Region 2, (run jointly with Itinerant Teacher of the Deaf, Andrew Jatta). This was held in Brikama Regional Education Office and was an opportunity for Andrew to contribute to training and gain experience which will be useful to him in his work with staff in mainstream schools.

August 2008
Course for Itinerant Teachers of the Visually Impaired to equip them with basic skills to support deaf children in mainstream schools across The Gambia.

February 2009
Introductory course on school management and organisation (for St John’s School, and also for HT and senior staff in Region 5)

June 2009
Two half-day courses run by Babs, Debra and Ruth for the staff of St John’s School for the Deaf. These focused on improving the quality of teaching and learning at the school and encouraging the introduction of more learner friendly and effective teaching strategies together with use of visual aids and other resources for learning.
A further half-day course for all staff was led by Malcolm and considered school management and organisation. Staff worked together to develop a Code of Conduct for teachers.

August 2010
Malcolm and Debra provided a deaf awareness course for tutors at the Banjul Annex of the Gambian Technical Training Institute (GTTI) where there are a number of deaf students in some of the classes.
Steve Tucker and Debra also provided training for Interpreters and Sign Language Teachers working for the Gambian Association for Deaf and Hard of Hearing (GADHOH) in aspects of professional practice, including practical tips and discussion of such aspects as confidentiality etc.

February 2011
Malcolm again worked at GADHOH where he observed the new training course for Sign Language Interpreters being co-ordinated by Summer Brownlees-Ross (VSO) and run by Yayha Jabbi from GADHOH.

The initial group of 10 students were being taught sign language by two deaf SL tutors from GADHOH. Later there would be assessments to select the best three people to progress to the final part of the course and become qualified SL interpreters.

Funds for running this course were raised by the staff and students of Year 7 at De Ferrers Academy in Burton on Trent.

They have raised several thousand pounds over the past few years by means of sponsored days of silence when all staff and students in Y7 teach without speech! Quite a challenge, but they have been very successful in each year beating the previous year's total! This year it has been used for this worthwhile project.

May/June 2011
Malcolm was joined by Babs Day (Head of Longwill School for the Deaf in Birmingham) making her second visit, and Lynda Holland (Head of The Hearing Impairment Support Service in Birmingham) making her first visit to Gambia.
Babs and Lynda provided a range of training for the staff of St John's School, following up work started when two senior members of the school staff visited the UK in February 2011.

This training was enthusiastically received by school staff who all contributed to the discussion and jointly developed a 'PATH analysis' and signed up to its use in school.

Babs and Lynda also ran a very successful school assembly where Lynda, who herself uses hearing aids, was able to demonstrate their effectiveness and provide encouragement for pupils to wear their own hearing aids, and for staff to give them encouragement to do so.
By the end of the week more than 20 pupils had received new ear moulds and had re-started using their hearing aids, and others were keen to do so!

Babs also provided training in the use of Visual Phonics and recorded a video of the sounds of speech with Gambian finger spelling substituted for the English version used in the UK, so it could be used at St John's.

May – June 2012
Babs and Malcolm visited and provided further training. Babs followed up her earlier work at St John’s, working with individual teachers to review the quality of their teaching and lesson preparation. This was very encouraging as all lessons seen were of at least satisfactory standard.

Malcolm worked with Dan Mendy (Principal of St John’s) and Summer Brownlee Ross (VSO at GADHOH) to provide a two day course for staff from the Gambian Technical Training Institute (GTTI) and the University of The Gambia.

Staff there have a number of deaf students in their classes and needed guidance in how to ensure these students could benefit from their teaching despite their disability.

The course was very enjoyable and well received and feedback from course participants was all very positive.
Also on this visit Dr Arne Eike, an audiologist and ENT specialist from Denmark, was funded by Soundseekers to join the GDCSP Team. Arne provided several focussed training sessions for members of the HARK Team, several of whom are new to the work and have had little previous training or experience in this work.

February 2013
On this visit Babs and Malcolm were joined by two teachers of the deaf from Bab’s School – Longwill School for the Deaf in Birmingham. They were Helen Cooper and Alison Jackson. Alison was accompanied by her husband John who is pastor of an independent church in Wolverhampton.
Although it was their first visit to Gambia the new ‘recruits’ settled in remarkably quickly and, with Babs taking the lead, both of them contributed very significantly to three sessions of training for the staff at St John’s School for the Deaf.

These sessions had to be held at the end of the busy school teaching day but, despite this, all the staff stayed behind and contributed enthusiastically to the sessions. As usual these courses were made to be good fun for participants as well as practical and instructive
Feedback was again very positive with staff saying they would like further sessions on a future visit. 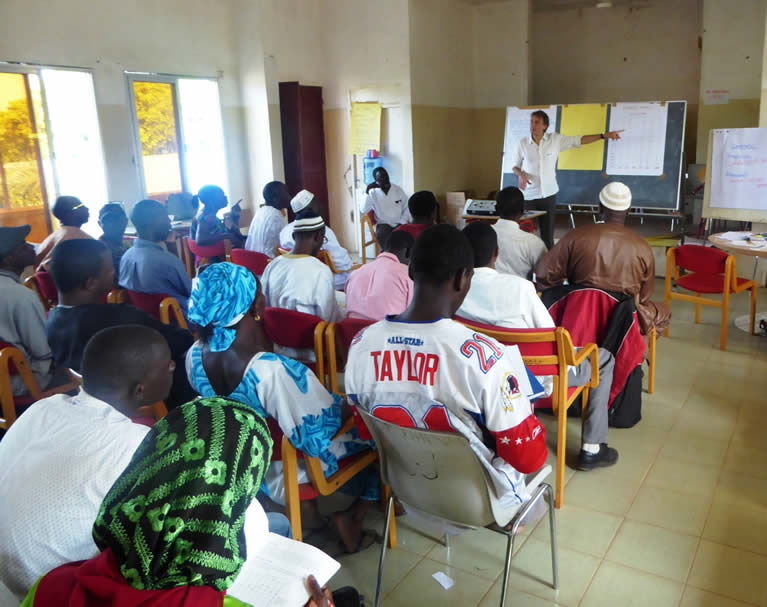 The aim of the Project was to increase understanding and awareness of the needs of deaf children across the whole of Gambia, to assist mainstream teachers in spotting children who may have a degree of deafness, and to give teachers guidance on ways of including deaf children in their classes.

With several thousand schools to be visited such a massive task was well beyond the resources of any visiting team and we realised that the most effective and sustainable way to achieve this would be to train the existing team of itinerant teachers to become trainers themselves. In this way the workload could be shared and each itinerant teacher could deliver training courses to schools in their own regions of Gambia.

The GDCSP Team of Malcolm Garner, Babs Day, David Couch and Lynda Holland were asked to lead on the Project and spent many hours developing in advance special folders of training materials which would be suitable for the itinerant teachers to use when running training courses in Gambia.  They also devised a training pack which could be left in each school after the training course had been delivered and serve as a permanent reminder of lessons learned.  All the materials were specially designed for use in an African and developing country context and Babs worked with a graphic designer to ensure they were also eye catching and easy to read and understand. 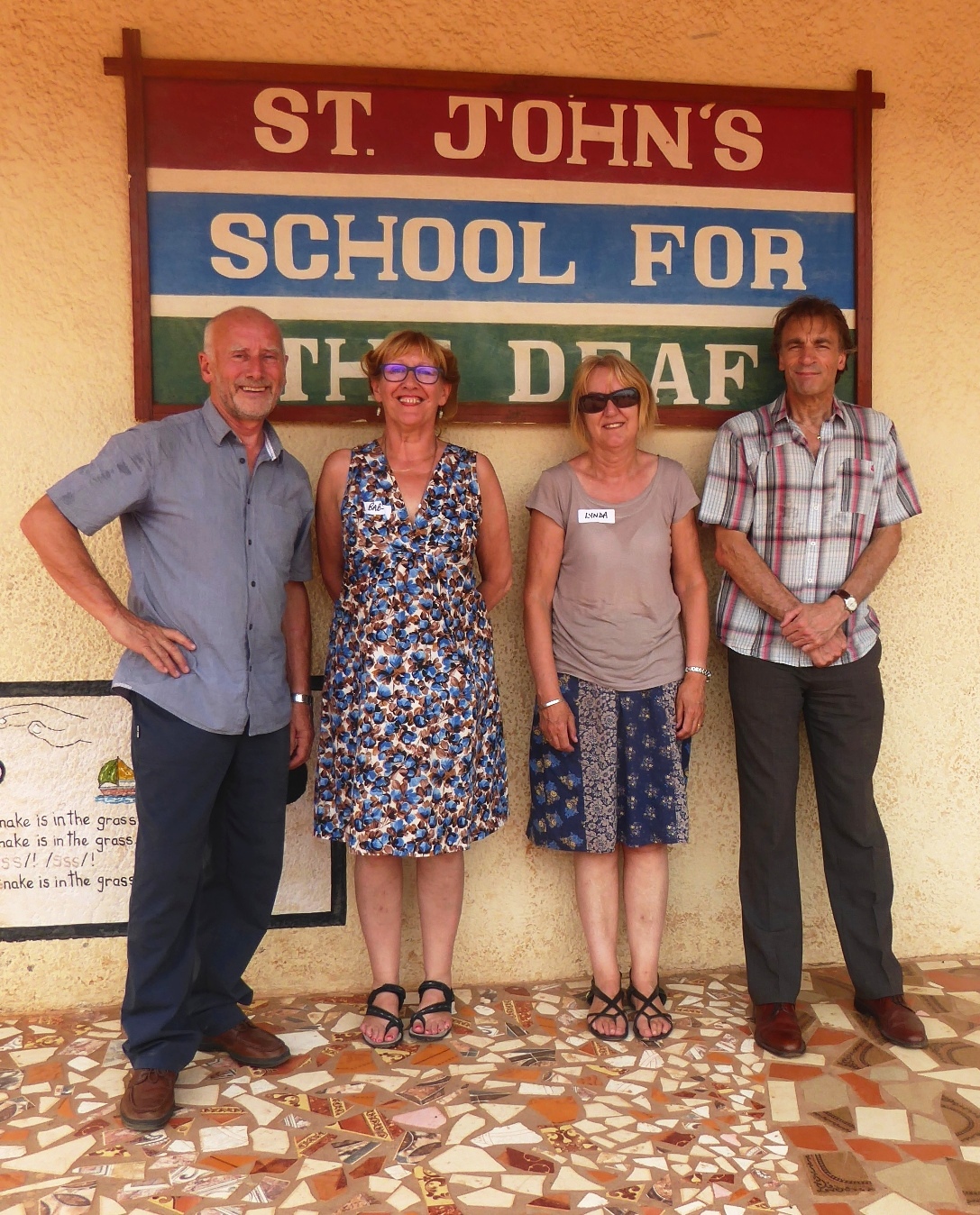 In July 2015, during their own Summer break, the Team spent an interesting and enjoyable week in Gambia training the 30 Itinerant Special Needs Teachers.  They firstly deepened the Teachers understanding of childhood deafness, then took them through the new training materials, making sure they understood all aspects of the content and also, importantly, how to deliver a training course in a way which was motivating and interesting to the course participants.

They made the exercise enjoyable and the itinerant teachers learned quickly and had a lot of fun in doing so. Sound Seekers, who had secured grant funding for the Project, were able to print and provide over 1000 copies of the training packs for the ITs to use in their schools and these were left in Gambia for them to use.

At the end of the ‘Train the Trainers’ course the GDCSP Team were thanked for their hard work and commitment. The ITs then were given responsibility to provide training to as many schools as possible in their own regions. This major initiative was to be co-ordinated by Nancy Mendy, the Senior Officer for SEN in the Ministry of Basic and Secondary Education.  It wll be interesting to see how well this exciting new approach works in practice as, if it is a success, it is hoped it can provide a model for use in other African countries supported by Sound Seekers.