One of the features of concern when Malcolm first visited Gambia was that, although there was a school for the deaf in Serrekunda, there was no specialist support of any kind for other pupils who are deaf or hard of hearing and attend mainstream schools, or for their teachers and families.

At the end of the very first training course for teachers from mainstream schools in 2005, a primary head teacher came forward and said he would have to apologise to a young deaf boy in his area. He explained that this lad had been turning up at school every day asking to come to school.

The Head had sent him away each time, believing him to be uneducable, and assuming he was really only wanting to come to have a free lunch. He went on to say:-

“After this training course I now realise that it is possible for deaf children to be educated so I will have to apologise to the boy, admit him to my school and buy him a uniform and text books etc". 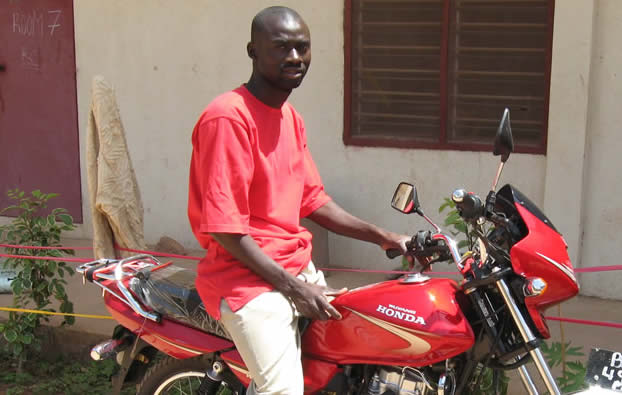 This humbling tale convinced the team that there was a real need for visiting specialist teachers of the deaf (called Itinerant Teachers of the Deaf - ITOD), able to travel to different schools and provide support, advice and guidance to deaf pupils and their teachers and families.

The team accordingly trained one teacher (Andrew P Jatta) from St John's School to undertake this kind of work and gained agreement from the Catholic Secretariat (the employers) for him to be released from his role at St John's.

The UK Team then raised money to pay his salary, purchased a 125cc motorbike for Andrew to use, and also agreed to pay the running costs of the motorbike.

Paying the salary remained a major commitment, although the sums involved are small by comparison with UK salaries (a teacher's salary in Gambia is less than £1000/yr).

Andrew Jatta proved an outstanding practitioner and such has been the success of the ITOD Programme that in 2010 a second ITOD has been appointed. This is Ali K Jatta (no relation to Andrew) and once again money was raised to pay his salary, buy a motorbike for him to use, and to pay the running costs.

Both Ali Jatta and Andrew Jatta have subsequently trained with the HARK Team and now work closely with them (see separate section in the website for HARK).

As a result, a deaf child who is diagnosed as deaf by the HARK Team can be referred to the ITODs who would visit him or her in their local school, assist in establishing hearing aid use and providing training for school staff, and support for parents where necessary.

Conversely, where Andrew or Ali came across a pupil who is thought to be deaf, or is having hearing difficulties, they can refer the child to the HARK Team for further investigation when they are next in the area.

Early in 2012 Andrew Jatta left his job working as a teacher with deaf children to move into a much better paid post as an accountant with the Sky Bank in Gambia. This had always been his stated intention and Andrew has worked immensely hard in difficult circumstances (e.g. studying at night by the light of a candle) to study for and sit the recognised international accountancy examinations (ACCA).

He is a great loss to the GDCSP and to St John's School but we have been very fortunate to have had Andrew working with us and so capably taking on the challenge of being the first ever itinerant teacher of the deaf in The Gambia. We wish him well in his future.

Then, very sadly, we were shocked in September to receive the awful news that Ali Jatta had unexpectedly passed away after a short illness. Ali was a lovely man and an enthusiastic and committed teacher. He was a delight to work with and was immensely well respected and liked by his colleagues and the many other parents and pupils with whom he worked.

He was also multi lingual and, like Andrew, will be very difficult to replace. We have indeed been fortunate to have his services and support over the last few years. Our most sincere sympathies go to his wife and their several children.

January 2014
Thus far we have not replaced Andrew and Ali as Itinerant Teachers of the Deaf. We hope to do so in the near future but the need is not so pressing.

We are pleased to say this is because, following the success of our Itinerant Teaching initiative and a similar one for visually impaired pupils run by Sightsavers, the Special Education Unit has established its own itinerant teaching service for pupils with special educational needs!

They have trained and now employ more than 30 itinerant teachers for SEN whose task is to visit and support schools in regions right across the country supporting not only deaf pupils but also those with vision impairment, learning and/or physical difficulties.

We feel very pleased that the initial work we started with the Itinerant Teaching Programme, and the hard work put in by Andrew and Ali, has contributed to the creation of a larger and more permanent SEN support team.

We have however not ruled out employing a specialist ITOD once again, and are working with Dan Mendy, Principal of St John’s School for the Deaf, to identify suitable candidates to undertake training for the role.