A chronological overview of the activities of the GDCSP

The effective training of local teachers and support staff is a vital part of the way forward in creating a sustainable support structure for deaf children in The Gambia. 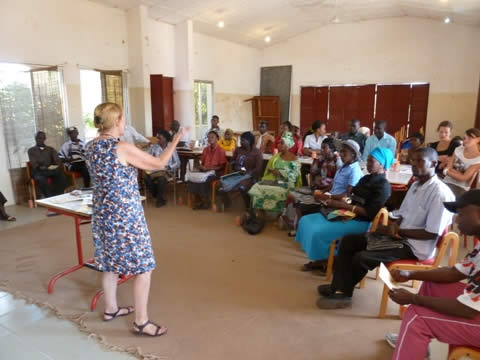 The following training courses have been delivered in The Gambia by members of the GDCSP Team. Team members have usually paid their own expenses and, in some cases, also paid the local costs of training courses (lunches, per diem payments etc.):

February 2009
Introductory course on school management and organisation (for St John’s School, and also for HT and senior staff in Region 5)

June 2009
Two half-day courses were run by Babs, Debra and Ruth for the staff of St John's School for the Deaf. These focussed on improving the quality of teaching and learning at the school and encouraging the introduction of more learner friendly and effective teaching strategies together with use of visual aids and other resources for learning.
A further half-day course for all staff was led by Malcolm and considered school management and organisation. Staff worked together to develop a Code of Conduct for teachers

August 2010
Malcolm, Debra and Steve Tucker provided a deaf awareness course for those tutors at the Banjul Annex of the Gambian Technical Training Institute (GTTI) who have deaf students in some of their classes.
Steve and Debra also provided training for Interpreters and Sign Language Teachers working for the Gambian Association for deaf and Hard of Hearing (GADHOH) in aspects of professional practice, including practical tips and discussion of such aspects as confidentiality etc.

February 2011
Malcolm visited for two weeks. In the first week he worked at St.John's School for the Deaf and also at GADHOH. Here he observed the new training course for Sign Language Interpreters being coordinated by Summer Brownlees-Ross (VSO) and run by Yayha Jabbi from GADHOH. The initial group of 10 students were being taught sign language by two deaf SL tutors from GADHOH and later there would be assessments to select the best three people to progress to the final part of the course and become qualified SL interpreters.

Funding for this course has been raised by the staff and pupils of Year 7 at De Ferrers High School in Burton on Trent. They have raised several thousand pounds over the past few years by means of a sponsored day of silence when staff and pupils in Y7 teach without speech! Quite a challenge, but they have been very successful in each year beating the previous year's total! This year it has been used for this worthwhile project.

In Week 2 Malcolm was joined by Gary Williams, Chief Executive of Soundseekers and they travelled up to Bansang Hospital for Gary to see for himself the HARK Mobile Clinic working to diagnose and treat deafness in children and adults in the area. No fewer than 17 people were issued with hearing aids, showing the level of unmet need and the effectiveness of the HARK Team!

The HARK Team at Bansang Hospital with patients waiting in the shade of the trees!

They spent time at Longwill School for the Deaf in Birmingham and were taught techniques of lesson observation used at the school, and saw the visual phonics system developed to help deaf children more quickly gain the basics of language acquisition.

Thanks are due to Babs Day (Head), Alison Carter (Deputy Head) and the staff of Longwill for the extensive support they provided both within school and in arranging accommodation for the visitors.

Also to Debra York and Ruth LeLohe for arrangements in Staffordshire and Stockport. The visit was paid for using monies raised by Malcolm who undertook a sponsored bike ride from his home in Bewdley, Worcestershire to the Mediterranean coast at Valras Plage in France. The 811 miles took 11 days to complete and raise well over £2000!
The intention is now for Babs and other staff to follow up this visit in Gambia later this year.

Babs and Lynda provided a range of training for the staff of St John's School, following up work started when two members of the school staff visited the UK in February (see above). This training was enthusiastically received by school staff who all contributed to the discussion and jointly developed a 'PATH analysis' and signed up to its use in school.

Babs also provided training in the use of Visual Phonics and recorded a video of the sounds of speech with Gambian finger spelling substituted for the English version used in the UK, so it could be used at St John's.

Other visits were made to deaf pupils in mainstream schools supported by Andrew Jatta and Ali Jatta (Itinerant Teachers of the Deaf) whose work and transport costs are funded by GDCSP. In addition Malcolm, Babs and Lynda traveled up country once again to see the HARK team at work, and also visit Bansang Hospital where Soundseekers plan to develop a regional audiology clinic and ear-mould making workshop in future. All round a full and productive fortnight!

School Transport
Assistance has been provided in maintaining the school buses, paying for spares, repairs and fuel. Most notably a replacement engine was obtained and shipped to Gambia for installation in the bus in October 2007. The engine was donated free by the First Bus Company in Kidderminster while shipping costs were met by KA Transport and Bewdley Round Table.

Detection of Deafness
Because of the complete absence of any testing arrangements for childhood deafness in The Gambia, in 2005 GDCSP members approached Soundseekers (formerly the Commonwealth Society for the Deaf), a national charity in London, to ask if they would consider placing one of their mobile hearing assessment clinics (based on a Land Rover) in The Gambia.

Following a joint visit in April 2006 with the Vice Chairman of Soundseekers, the late Peggy Chalmers, this was agreed and, after they had been successful in raising funds, a superb brand new mobile clinic (called a HARK) was delivered in April 2007.

As part of the package, training was also provided by two English Audiologists, Drs Fran & Llew DeSouza. They spent 8 months working with local Gambian staff to teach them how to use the diagnostic equipment and detect and assist deaf children and adults in managing their deafness and using hearing aids.

The HARK started visiting different parts of The Gambia in August 2007 and now visits a number of local clinics on a fortnightly basis. Using its facilities and resources the staff have already tested the hearing of nearly 2000 adults and children. A number of deaf children and adults have been identified and have received further assessment, with several having now been provided with hearing aids, and referred to the GADHOH (Gambian Association for Deaf and Hard of Hearing) for ongoing adult support.

A Memorandum of Understanding has been agreed with the Gambian Health Services to maintain the HARK through and beyond the period of initial funding.

The Soundseekers website can be accessed though this link www.sound-seekers.org.uk